So this may be the “August reads” but if I’m being entirely truthful, half of these books were read last month. This month has been busy as I’ve been focused on my writing and haven’t had a ton of time to read. (In case you haven’t heard, I have some exciting book news on my own!)

But, that’s part of the fun of the challenge, right? Navigating life and squeezing in moments to read — even if that means it’s only a paragraph or two at a time. Hopefully, I’ll get back on the book track for September, but for now, here are my “August” reads:

As a famous soprano sings at a party held in honour of a Japanese businessman, the lights go out. A group of mismatched terrorists arrive in hopes of kidnapping the President — who, unfortunately (or fortunately for him) decided to stay home that night to watch soap operas. At a standstill, the days unfurl long and slow, bound together by the musical notes that flow soft and smooth from the soprano’s throat. The international hostages and their captors find unexpected commonalities and bonds but life can’t last like this forever.

This book was an interesting read. It was well written and unique in its exploration of “suspended time.” And while there were a lot of things I enjoyed about the novel (rich writing, luxurious character development), this intentional slow pacing also contributed to some of my hesitations about the book.

There are a lot of really passionate reviews about this novel but I struggled to get on board with the hype. While I enjoyed the read, at the end of the day, it just wasn’t the book for me.

Best known for her work on The Office and Unbreakable Kimmy Schmidt, Ellie Kemper shares a humorous collection of stories and short essays about her life. With tales about motherhood, her rise to fame, and her awkward encounters with other celebrities, Kemper seems like the kind of person we all want to have in our friend circle.

The writing was humorous and clever (although perhaps not in a laugh out loud sort of way) and I really enjoyed the way she presents her material. While there were occasional bits that felt slow, this book did seem to be “on brand” for the actress. She often writes like the characters she plays and her voice seemed to echo off the page.

Suggestions for humourous novels: ** Bossypants by Tina Fey ** One For the Money by Janet Evanovich ** Yes Please by Amy Poehler ** The One-Hundred-Year-Old Man Who Climbed Out A Window And Disappeared by Jonas Jonasson ** Confessions of a Shopaholic by Sophie Kinsella ** Is Everyone Hanging Out Without Me? by Mindy Kaling ** Talking As Fast As I Can by Lauren Graham **

Most Canadians / Olympic fans have probably heard of Clara Hughes — the first and only athlete to win multiple medals in both the Summer and Winter Games. She was the Canadian flag bearer at the Vancouver 2010 Olympics and became one of the prominent spokespersons for Bell’s Let’s Talk, a day designed to end the stigma attached to mental illness.

In her book, “Open Heart, Open Mind,” Clara shares not only about her years as a professional athlete but also about the toll that took upon her both physically and mentally. Pushed to extremes and stripped of her own confidence, Clara doesn’t shy away from talking about her struggle with severe depression.

While there were bits of the book that seemed to fall flat for me, I appreciated Clara’s honesty and willingness to dive into heavy topics. The strength of athletes constantly amaze me, but this book is a great reminder that our health encompasses so much more than just muscles. 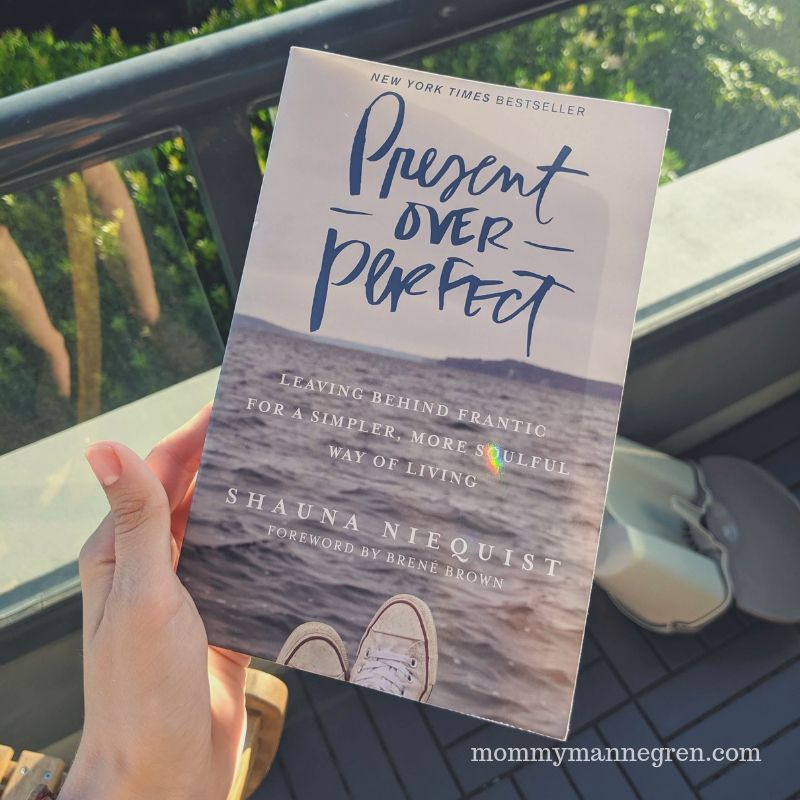 It’s ironic that I’m using this book as my “speed read” category because, in actuality, this book is all about slowing down and savouring the moment. In Present Over Perfect, Shauna writes about restfulness and connection and the purposeful decluttering of life.

The author writes this book as a collection of memoir-like essays. Her writing feels like a thick slice of chocolate cake — comforting and warm. There is much about her personal struggle that I don’t identify with but I did appreciate the message behind this book. While I occasionally found myself wishing for more of a theological punch to the essays, there was a ton of food for thought here.

And in case you’re wondering… Yes, that is an empty compost bin in the back of the photo. But there’s also a tiny, little rainbow and I’m choosing #presentoverperfect and not re-taking it. 😉 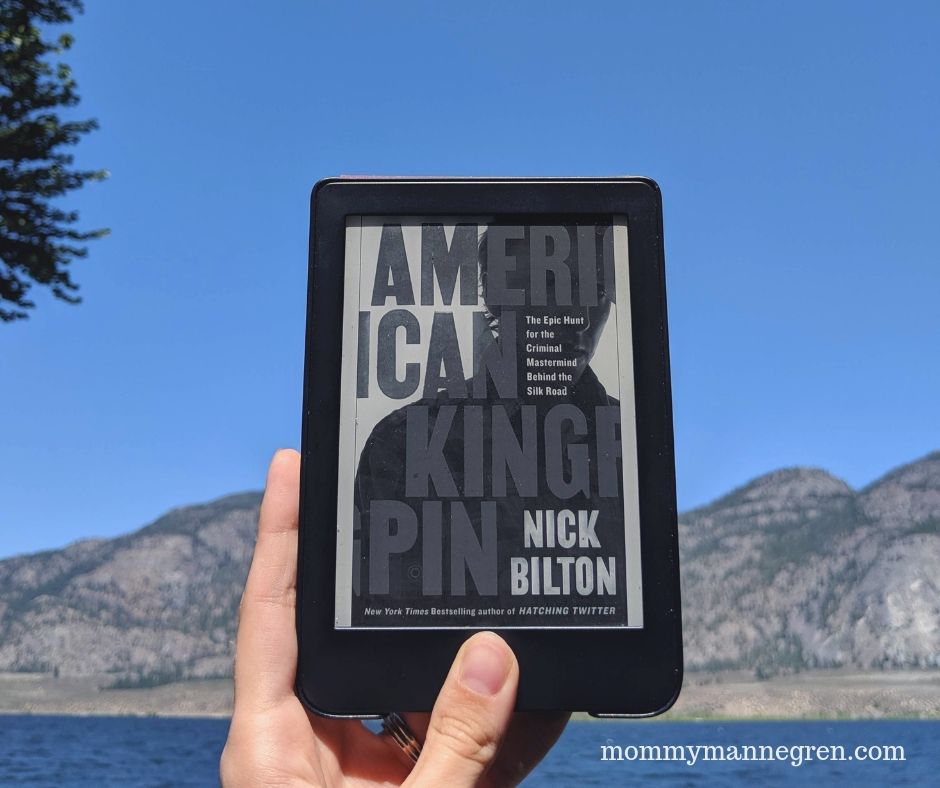 The “Kingpin statue” is a charge reserved for the boss of an organized criminal enterprise. This is just one of seven counts that Ross Ulbricht was ultimately tried for after the 26-year-old built a multi-million dollar, drug-trafficking website called, “Silk Road.” American Kingpin is the story of how he got there.

Honestly, this is not a category that I was looking forward to. (That’s right, I do include categories that challenge me too!) After struggling to find a book that fit the prompt, I decided to read American Kingpin just to get it over with. To my surprise, I ended up inhaling this book in little over a day — and not because I just wanted to hurry through it. It was one of those books that I couldn’t put down!

This isn’t a case I’d ever heard of before but I was immediately hooked by this Walter White type of real-life story. While the book is non-fiction, a lot of the dialogue and character development reads like fiction which makes it a more digestible read. I found this to be a highly intriguing look into an absolutely mind-boggling story, and I give this book 3.9 stars out of 5.

Want to join the discussion?
Feel free to contribute!

Nine Fun Board Games for Kids Under 5

This site uses cookies. By continuing to browse the site, you are agreeing to our use of cookies.

We may request cookies to be set on your device. We use cookies to let us know when you visit our websites, how you interact with us, to enrich your user experience, and to customize your relationship with our website.

Click on the different category headings to find out more. You can also change some of your preferences. Note that blocking some types of cookies may impact your experience on our websites and the services we are able to offer.

These cookies are strictly necessary to provide you with services available through our website and to use some of its features.

Because these cookies are strictly necessary to deliver the website, refuseing them will have impact how our site functions. You always can block or delete cookies by changing your browser settings and force blocking all cookies on this website. But this will always prompt you to accept/refuse cookies when revisiting our site.

We fully respect if you want to refuse cookies but to avoid asking you again and again kindly allow us to store a cookie for that. You are free to opt out any time or opt in for other cookies to get a better experience. If you refuse cookies we will remove all set cookies in our domain.

We provide you with a list of stored cookies on your computer in our domain so you can check what we stored. Due to security reasons we are not able to show or modify cookies from other domains. You can check these in your browser security settings.

We also use different external services like Google Webfonts, Google Maps, and external Video providers. Since these providers may collect personal data like your IP address we allow you to block them here. Please be aware that this might heavily reduce the functionality and appearance of our site. Changes will take effect once you reload the page.